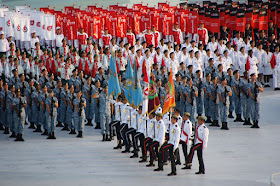 In plain sight: Can you spot the "Timika 1996" streamer awarded to RSAF UAV Command?


The Republic of Singapore Air Force (RSAF) marks its 50th anniversary with a flypast at this year’s National Day Parade (NDP).

Many of you staying around the holding areas for the RSAF aircraft and helicopters may have noticed the upsized air segment or heard the flypast roar into action during the rehearsals.

At last Saturday’s NDP preview, the commentator said the flypast was made up of every manned aircraft used by the RSAF. While technically correct for Singapore-based RSAF aircraft, it would have been nice to also recognise aircraft based outside Singapore that carry the RSAF insignia proudly. These are the Pilatus PC-21 flown by 130 Squadron as trainer aircraft at the Royal Australian Air Force Base Pearce in Perth, Australia, and the Aermacchi M-346 which is operated as an advanced jet trainer by 150 Squadron in Cazaux, France. 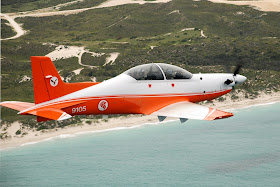 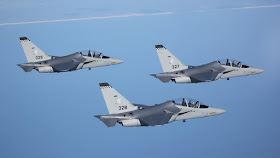 Afterall, without these overlooked squadrons/aircraft, the flypast would not be possible. It would also be a subtle way to remind the public that RSAF training takes place round the clock and round the world, with detachments sustained in Asia, CONUS and Europe  - a feat many Singaporeans take for granted.

Speaking of being overlooked, the parade commentary should have highlighted the streamers carried by the colours for Headquarters Commando and the RSAF Unmanned Aerial Vehicle (UAV) Command. These streamers were awarded to recognise the contributions and achievements of the Commandos and UAV Command who saw action in separate Singapore Armed Forces (SAF) operations more than 20 years ago.

The Commandos earned their operations streamer for the SQ117 hostage rescue in 1991 while the RSAF UAV command was awarded its “Timika 1996” streamer for its deployment of a Scout UAV detachment to support a TNI-led hostage rescue mission in Indonesia’s Irian Jaya province.

People sometimes criticise the SAF for being an untested force. These streamers tell a different story.

It’s been more than 20 years since Timika and what used to be hush-hush shouldn’t be anymore, particularly in an important anniversary year for the Air Force and with a streamer held high by the UAV Command ensign in plain sight, visible to one and all.
David Boey at 4:30 PM
Share