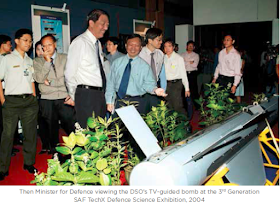 Secret weapon know-how and international conferences make strange bedfellows. But that has not deterred Singapore from bringing the two together at the world’s first defence technology summit.

Close on the heels of the Trump- Kim Summit, Singapore will host another high-level, first-of-its-kind meeting next week (28-29 June 2018). It's called the Singapore Defence Technology Summit and will pull in top defence officials who plan and implement weapons programmes.

Organised by Singapore's Defence Science & Technology Agency (DSTA), the Tech Summit emphasizes the republic's ambition to be a key player in the defence technology arena.

Hard won track record
In order to do so, Singapore must demonstrate that it has attained a respectable level of competence, experience and exposure to plan, execute and sustain complex engineering projects. Having shown we have arrived is just part of the story.

Singapore must also convince its peers that the city-state's value in collaborative efforts cannot be inferred from its size alone. And while we proudly proclaimed 50 years of defence technology experience in 2016, our legacy is eclipsed by nations who have amassed experience in the art and science of war since the time of edged weapons.

When one remembers that defence professionals are not the easiest audience to impress - particularly those exposed to leading edge defence technology and those who have wartime experience - our defence managers, scientists and engineers should use the summit as a platform for show-and-tell. That much is clear from the summit’s programme. It includes site visits for delegates to learn about military technology and non-defence innovations such as the management of shipping in Singapore port (one of the world’s busiest with a vessel entering or leaving every minute), the Woodlands checkpoint (the world’s busiest land border crossing) along with presentations on the airbase of the future (this will replace Paya Lebar Air Base after 2030) and the Singapore navy’s latest warship, the Littoral Mission Vessel.

According to DSTA, more than 400 delegates from 17 countries, including the heads of defence procurement agencies in Asian and European nations, are due to attend the summit from next Thursday at the Shangri-La Hotel. An international slate of delegates from about 10 countries are scheduled to speak at the event.

Getting delegates here is due in no small measure to Singapore’s reputation as a reference customer for defence purchases. Our rigorous no-nonsense approach to managing weapon purchases from concept to retirement, a discipline known as Life Cycle Management, and capabilities for customising weapons to suit the Singapore Armed Forces specific operational requirements are well-regarded. Many delegates will probably come to network with Singapore’s defence professionals, convinced that their time here will reap dividends from lessons learned and current best practices.

Success factors
The Tech Summit’s success, however, goes beyond securing a respectable turnout and hosting the event efficiently. Being the first of its kind, DSTA has no reference points to calibrate success. Complicating matters further is the lack of any expectations that the event will result in a declaration of any sort.

Beyond polite chit chat and the exchange of name cards, it is worth it? After all, secret weapons and open sharing make strange bedfellows. This is particularly the case when delegates from countries such as the United States, China, the Middle East and Europe sit in the same room to talk about defence and security matters.

If the Tech Summit can strengthen Singapore’s standing as a credible player in defence technology development and management, the event would contribute meaningfully to the republic’s strategic goal of being a thought-leader in this arena.

Remember that reputations are transient and can disappear if one is not careful. Singapore's "reference customer" accolade was earned the hard way and we have had our fair share of blind alleys and challenges. External factors such as the dot.com boom at the turn of the century resulted in a number of defence engineers moving to chase their dream in the private sector. The lessons on talent management and staff retention drummed home the message that People are our most vital resource.

It is therefore vital that Singapore continue to punch above its weight and learn from the best, and the summit has immense value for host and visitors alike to engage in meaningful exchanges.

In his speech during the defence budget debate, Minister for Defence Dr Ng Eng Hen first broached the idea of the summit. Dr Ng said: "I believe that Singapore can lead in defence technology even though we are small. So to achieve that aspiration, DSTA together with our national universities, A*STAR (Agency for Science, Technology and Research), government agencies like GovTech (Government Technology Agency of Singapore), Cyber Security Agency of Singapore, National Research Foundation, the Singapore Economic Development Board, will host an inaugural Singapore Defence Technology Summit in 2018.

"I asked staff whether there were any global defence summits in the world. They said that there weren't any, and I replied, "That is good, let us try". This Summit will provide a global platform to invite luminaries, leading figures, to come share their views. It will give us a window into the future. Not only that, it allows opportunities to network and increase our access to new ideas and innovation. Because you and I know that for defence, for us, it is existential - we need to deploy technology because other factors are working against us."

The post-Cold War consolidation of the world’s defence industry has been rapid and vicious. Scores of small players were forced to exit the scene, edged out by the double whammy of dwindling defence spending and their inability to keep pace with disruptive technologies and industry flux. In the United States, for example, fewer than 20 of the top 100 defence firms that existed in 1991 are still around today. European defence firms have endured a similar crunch. Those that survive represent the best of the best. They are likely to only want to do business with strong partners who can value-add to a relationship. This is why it is vital that Singapore make its voice heard.

Balancing the Need-to-share/Need-to-know
In this regard, Singapore’s defence professionals maintain a tricky balance between need-to-share and the restrictive need-to-know domain.

In past years, Singapore has worked around this conundrum by publicising some projects after they have been surpassed by newer, more capable systems. The rationale is that defence cognoscenti can work out their “guesstimate” of Singapore’s capabilities by joining the dots from open source data points. We did this in 2004 at the TechX exhibition when a locally-developed TV-guided glide bomb went on show for the first time. This was some 20 years after the bomb had been proven during weapons trials using a Republic of Singapore Air Force A-4 Skyhawk fighter-bomber.

More recently, a 2016 book commemorating the Defence Technology Community’s 50th anniversary profiled a 1999 project to develop autonomous vehicle concepts. This nugget of information was aimed at prompting defence observers into thinking about Singapore’s current autonomous vehicle capabilities as the 1999 project has been wrapped up and consigned to history. The book also revealed how defence engineers developed an anti-armour munition for now-retired SM1 light tanks. At the time, the sabot round codenamed Project Spider* was the most powerful anti-armour round fired by the tank's 75mm gun.

Stories abound on how Singapore has benefitted from the 5,000-strong community of defence scientists and engineers that the republic has nurtured for over 50 years. During the 2004 Sars crisis, military night vision technology was adapted to develop fever scanners. In 2016, data analysts from GovTech and DSTA used their know-how in operations research to identify a rogue Circle Line MRT train whose faulty signaling equipment led to a series of disruptions on other trains.

Alas, the full suite of capabilities will never be revealed. As Deputy Prime Minister Teo Chee Hean said at the DTC’s 50th anniversary exhibition: “The ones that are the most impressive, are the ones that we don’t show.”

On the sidelines of the summit, our defence experts should do their utmost to share unclassified stories of the work among foreign delegates because such sharing engenders confidence among our friends and partners.

Such stories also contribute immeasurably to deterrence as potential adversaries are left wondering else Singapore’s defence technology community has been busy tinkering with.

Note:
Yours truly was the author of the story in the Defence Technology Community’s 50th anniversary book that unveiled the armour-piercing fin-stabilised discarding sabot APFSDS anti-tank munition developed under Project Spider. The effort to upgrade AMX-13 light tanks to SM1 standard under Project Archer was also declassified for the book.
David Boey at 12:30 AM
Share