Eyes in the sky: RSAF Skyvans were modified in the 1990s for the Maritime Air Surveillance role. Note the ventral radar blister on the first aircraft with just inches to spare from scraping the ground.

I've flown with all three types of Republic of Singapore Air Force (RSAF) transport aircraft: the Shorts Skyvan, Lockheed C-130 and the Fokker 50.

All flights aboard military aircraft are memorable. But the one with a 121 Squadron Skyvan was the one that I treasure till today because it gave me a fresh perspective of the aircraft and the squadron that supported it.

For a nervous flier, a trip on an aircraft called the "Skyvan" and one that looked like a flying box with a hunched back (the main wing spar passed over the cabin to maximise space within. Skyvan was designed for practicality, not aesthetics) didn't inspire confidence. Neither did the twin turboprops, whose small size and three-bladed propellors gave the aircraft a somewhat underpowered look. To top it all, the skinny wing was strengthened with a long strut on each side - which was a feature I remember on propellor-driven planes from another era.

The flight took place at Changi Airport in the early 1990s when I was an NSF reporter with Pioneer magazine. As the red and white Skyvan puttered onto the taxiway from the 121 SQN dispersal at the edge of Runway 1, the RSAF transport aircraft looked small and archaic compared to the shiny airliners at the airport.

I remember the Skyvan almost shaking itself to bits as the pilots throttled up to full power, the smell of exhaust fumes invading the non-airconditioned aircraft cabin and the almighty vibration and drone that zinged its way into one's ears despite the foam insert ear plugs.

As the aircraft had a light load - two pilots, an aircrewman in the cabin, two pax from Pioneer magazine - the takeoff run was surprisingly swift and short. You could feel the Skyvan leap into the air, leaving the great broad airport runway behind like a concrete river.

That whining, rhythmic ear-piercing drone from the Garrett AiResearch turboprops was with us throughout the flight, never giving passengers (or nervous fliers) a moment's peace. The Skyvan had no toilet, the boxy aircraft seemed to bounce in the afternoon thermals, and the non-retractable wheels must have added much drag as the Skyvan slowly plodded along towards Pedra Branca, our turnaround point.

Years later, when the RSAF modified its Skyvans for Maritime Air Surveillance (MAS) duty by installing a belly-mounted surface search radar under a prominent black blister, I often wondered how the radar operators endured their long overwater flights in the Skyvan. Like the RAAF Caribous that occasionally used Paya Lebar Air Base in the 1980 and 1990s, one heard a Skyvan long before you actually spotted it.

I never saw the inside of the Skyvans modified for MAS, so have no idea whether they improved the acoustics and passenger comfort. I imagine that a long flight staring constantly at the radar PPI must've been mentally taxing and physically draining, not to mention potentially disorientating. I salute Skyvan MAS crews for their endurance, particularly when the aircraft flew round and round on race track patterns and one couldn't look outside the windows for visual orientation.

So don't let first appearances fool you. As with many things in life, one should make the effort to understand the subject instead of jumping to quick conclusions that are often totally wrong or misguided.

Note:
Am writing this from memory: I think the pilot-in-command for that Skyvan flight was a Captain Baldev (spelling?) Singh. Sorry I can't recall the name of the other pilot or aircrewman. With fliers like that and a dedicated engineering team, you get to understand how 121 SQN achieved its magnificent tally of accident-free flying hours. I still have the 121 SQN milestone badge somewhere in my collection. I'm not an avid badge collector but I do keep patches and squadron badges as momentoes, particularly if the badges remind me of a meaningful occasion. Really good memories of the Gannets and their beloved Skyvans. 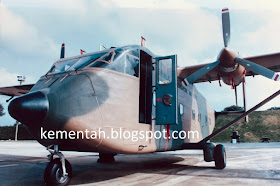 The RSAF painted its Skyvans in two colour schemes. Three were in the high-viz red and white livery for Search and Locate duty while another three had green and tan war paint (seen here). 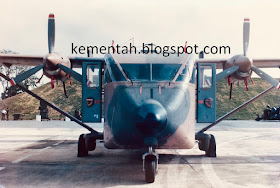