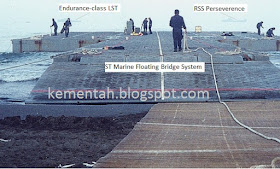 These devices were designed and made in Singapore by Singapore Technologies Marine (now ST Engineering Marine). The Endurance-class LSTs, which were first commissioned 20 years ago, are fitted-for-but-not-with a number of novel features like the FBS which will only appear on special occasions.

Using rigid and flexible connectors, FBS pontoons can be interconnected end-to-end or sideways in several permutations: I, T or H-shaped as operational considerations require. The assembled pontoons are designed to serve as an unloading platform or bridging system for the transfer of personnel, vehicles and cargo from ship to shore.

An air-cooled diesel engine powers pumpjets on the FBS. The engine adds to the versatility of the system as it allows the self-propelled craft to be used as a ferry (see pix below) and self-deploy from the mothership without the assistance of tug boats. The system is designed to function even in moderate seas. 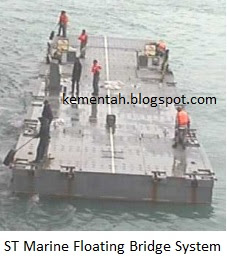 Endurance-class LSTs were modified with local inputs more than 15 years ago to carry FBS pontoons on the side of the hull. This method of carriage is similar to the British Mexeflote system. Deployment is via powerful winches which release the pontoons using cables from the side of the LST hull. The next three pictures show the Mexeflote at sea, being deployed and in use as a ferry. The RSN FBS concept of operations is broadly similar to Mexeflote so readers can use their imagination after viewing the next three images. 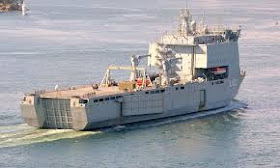 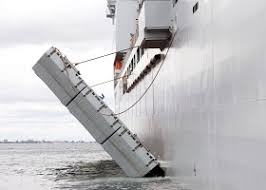 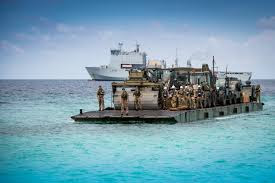 The picture below shows RSS Resolution being modified to carry the FBS. Note the prominent hull reinforcement strake which will support the platform when it is attached to the hull. 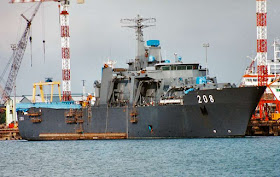 RSS Resolution before (above) and after (below) the modification to mount the FBS. Note the number of FCEPs carried. Photos by Ralf Gierke and John Wilson respectively. 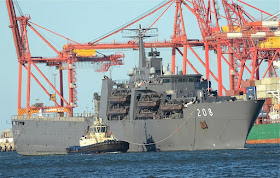 The FBS is operated and maintained by the RSN Naval Logistics Command (NALCOM) and 191 Squadron.

This blog post has deliberately left out facts and figures on the FBS beyond generic descriptions. The system is visible from satellite pictures and can be seen by anyone travelling into Changi Naval Base if you know which way to look on the way in.

We salute the men and women of NALCOM and 191 SQN for their dedication and professionalism in keeping the Navy's sealift capabilities in top form. The creativity of RSN planners and Singapore's defence engineers in devising the LST's noteworthy landing craft capacity and the FBS pontoons is beyond praise.

We hope the blog posts on Endurance-class LSTs and the FBS have given you a better appreciation of what these assets are capable of, if you look beyond the obvious. The LSTs are now in their 20th year of service and will eventually be replaced by another class of warship which will, likewise, have its unique features developed with local inputs.

Apart from what's visible like FCEPs hanging on davits and attachment points for pontoons, the Singapore navy's Endurance-class LSTs have a few other nifty features better left unsaid. Those who know, will know.

P.S. If you ever see all four Endurance-class LSTs fitted with the FBS and a full load of FCEPs, you know it's time to clear the junk out of your bomb shelter and stock up on toilet paper...