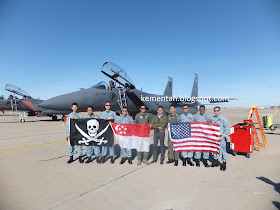 Flag bearers: Had a nice time in Dec 2013 with the Peace Carvin V detachment which flew to Luke AFB from Idaho. The level of professionalism, discipline and team work displayed by the RSAF CONUS detachments was exemplary. That Singapore flag was with me at the F-15SG roll-out ceremony in St Louis, Missouri, in 2008.

In December 2013, I visited Arizona to see the Singapore Armed Forces (SAF) stage its air-land war games, codenamed Forging Sabre (XFS), at a vast desert range in the United States.

Here's one of several commentaries I wrote from that trip. If you follow the evolution of XFS, you may notice incremental capability jumps from one exercise to another.

I stayed in Phoenix for a couple of days after the assignment as I'd never been to the city before. I also used the time for a day trip to the Davis-Monthan bone yard and the Titan Missile Museum near Tuscon, which was quite memorable. Some pix of downtown Phoenix at the end of the commentary below. Had a wonderful time exploring the city on my own.

Speaking the language of deterrence, with precision
By DAVID BOEY

Published13 DECEMBER, 2013
UPDATED 14 DECEMBER, 2013
As the country with the largest and most powerful air force in South-east Asia, Singapore’s defence planners know a thing or two about the dangers of air power unleashed.

The firepower demonstration staged Tuesday, Arizona time, as part of the Forging Sabre war games provides telling signs as to how the Singapore Armed Forces (SAF) might swing into action during a conventional war.

Minister for Defence Ng Eng Hen saw first hand how the Singapore Army and the Republic of Singapore Air Force (RSAF) work in concert to knock out an enemy’s air power. The narrative for the 12-minute firepower demo appeared like the game plan for a hot war scenario.

It also appeared to underline why the RSAF has invested heavily in advanced multirole strike warplanes like the F-15SG and F-16C/D, as well as precision-guided munitions that can hit targets at long range with deadly accuracy, day or night, and an advanced command and control battlefield management network to pull its combat forces together.

The United States military’s Barry M Goldwater Range — some 19 times bigger than Singapore — is the arena for Exercise Forging Sabre, a two-sided combined live-fire exercise that will involve some 700 full-time national servicemen, operationally-ready National Servicemen and SAF regulars from Dec 2 to Dec 17. The war games are the largest and most complex staged by the SAF since Exercise Forging Sabre 2011.

Arrayed before the NATO Hill observation point were targets the SAF was tasked to demolish within minutes. Whether by intention or uncanny coincidence, the narrative for Forging Sabre’s light and sound show reflects the logical sequence for taking out conventional threats.

CRIPPLE THE ROCKET LAUNCHERS
First to go was a remote-controlled vehicle that ran for its life along a sinuous desert dirt track. This simulated a moving target — in this case, a mobile rocket launcher. It was tracked by SAF sensors that guided a laser JDAM bomb dropped from a high-flying F-15SG warplane, orbiting at about 4.9km, dead on target.

After the strike, the narrative indicated that the F-15SG returned to its holding area to await orders to take out another target. As each F-15SG can carry up to 15 JDAMs, the war load of the RSAF’s most advanced warplane is noteworthy, considering Singapore has bought 24 of these combat-proven warplanes.

BLIND THE ANTI-AIRCRAFT RADARS
Next on the target list were radars for the enemy’s anti-aircraft weapons. Two F-16 warplanes entered the arena to deliver a pair of laser-guided bombs on a “radar site”.

As the bombs blew the target apart, the F-16s left the scene at high speed, releasing a trail of blazing flares that could have deceived heat-seeking missiles launched against them.

CLIP THE WINGS
After this strike came the main strike team, made up of only two F-15SGs. Each carried four Mark 84 907-kg bombs — the largest bombs in the RSAF’s arsenal — to demolish aircraft fuel and ammunition storage at a hostile airbase.

As the bombs blasted the simulated airbase, they created a tall column of smoke that marked the death of an air force. The narrator noted that a real airbase target may involve eight or more F-15SGs, and that single strike by a fraction of what would be fielded in a shooting war gave observers some idea of the damage such a main strike could inflict.


It is interesting to note that the opening phases of the Forging Sabre firepower demo placed airbases and surface-to-air missile sites high on the target list, as such a game plan was indeed pursued by air-power planners who fought in Iraq and the former Yugoslavia.
SAF defence planners understand that warplanes are weapons only when they are in the air, sustained with weapons, fuel and pilots. A warplane on the ground is a high-value target just waiting to have its wings clipped.

STOP THE TANK COLUMNS
In came the Apache attack helicopters which drizzled a simulated town with rockets fired at a column of enemy vehicles packed in civilian areas. Red buildings indicated civilian targets that could not be hit, as these could result in civilian casualties. The cloud of rockets that smashed the tank column would have stopped a real one in its tracks.
STRIKE ITS COMMAND CENTRE
The finale came from the Singapore Army’s HIMARS (High Mobility Artillery Rocket System) which were tasked to destroy static, high-value targets such as command posts.

The observers on NATO Hill scrutinised the live-firing area to pick out the HIMARS launchers. Those who failed to spot them could not fail to notice the tendrils of smoke which rose from the desert floor, pointing towards the direction of the simulated enemy.

From start to finish, the successive blasts of flame and steel at various desert targets appeared to be random, uncoordinated shows of strength, each war machine creating a bang on its own.

NERVES THAT MOVE THE MUSCLE
Behind the scenes, the hive of activity at the Forging Sabre Command Post tells a different story.

Each warplane and attack helicopter did not fight its own war, but delivered its punch as part of a larger effort at wielding the SAF’s ground and air combat forces to deliver an integrated strike using networked fighting capabilities.

Seeing such battle managers work in concert with the sharp end of the SAF, such as Commando teams, rocket artillery, warplanes and attack helicopters, demonstrated how far the Third Generation SAF has advanced to sharpen its deterrent edge.

By day and by night, enemy battlefield targets came under the closest scrutiny by the SAF and received violent treatment, as precision weapons and relentless strikes tore apart the enemy’s war fighting potential. At Forging Sabre, precision strikes spoke the language of deterrence: Words into action, and action into results that indicate the score card, should the SAF ever swing into action.

ABOUT THE AUTHOR:
David Boey, a blogger on defence issues and member of the Advisory Council on Community Relations in Defence, is in Arizona to cover the Forging Sabre war games. 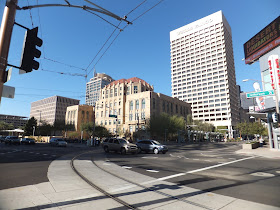 Downtown Phoenix and one of its suburbs. I took the tram to the end of the line just for the heck of it. You can see how the RSAF benefits from the fine weather there. 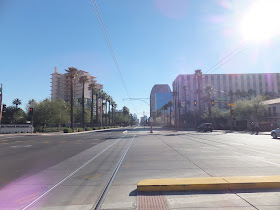 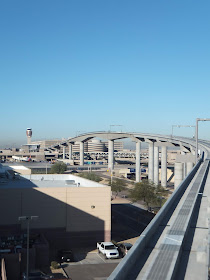 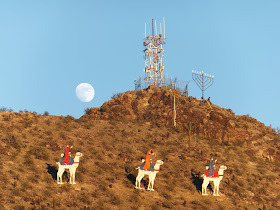 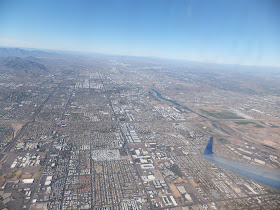 The Salt River (above the winglet) and part of Tempe. Downtown Phoenix is at the top of the picture. 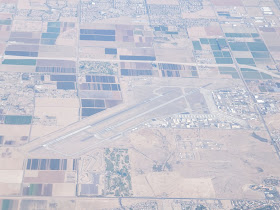 Caught a view of Luke Air Force Base en route to LAX. Four F-15Gs are visible parked in the open. The row of F-15s is near the tip of the Y-shaped concrete apron in front of the last buildings facing the apron. This was where the first picture was taken. The white sun shelters are for Luke's resident F-16s.
David Boey at 12:01 AM
Share