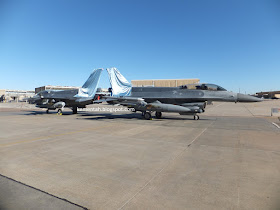 These Republic of Singapore Air Force (RSAF) F-16Ds with the Peace Carvin II detachment at Luke Air Force Base (AFB) have something special beneath the covers. The fighters were painted with commemorative tail flashes to mark the 20th year of PC II in 2013.

On 18 December 2013, then United States Pacific Air Force commander, General Hawk Carlisle, did the honours with Major-General Hoo Cher Mou, who was then RSAF Chief of Air Force.

The F-16Ds serve a joint RSAF-USAF command within the 425th Fighter Squadron of the 56th Fighter Wing at Luke AFB.

Here's something you may find interesting. The four tail flashes on the top row were ideas that were not chosen. I must say all the tail flashes look great and the winning choices certainly look stunning. 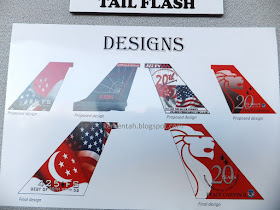 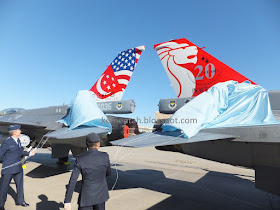 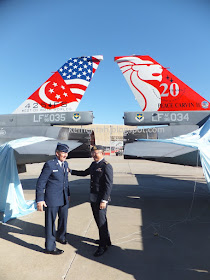 These pictures were taken during my first trip to Luke AFB, which is near the city of Phoenix in Arizona. MINDEF flew me there to see Exercise Forging Saber. I was the only reporter who extended my stay in Phoenix after the exercise. Am glad I did as it gave me the opportunity to see Phoenix firsthand and visit places like Tempe. Also drove 122 miles alone on Interstate 10 to see the aircraft boneyard at Davis-Monthan AFB, then a little farther to visit the Titan Missile Museum, then back to Phoenix in the evening. I left Phoenix before sunrise when it was pitch dark on the I-10. It was only during the drive back when I realised that I had driven through beautiful desert scenary, the kind you see in cowboy and red indian movies. I saw signs along the I-10 pointing to Marana and realised PV is literally in the middle of.... nowhere [which worries me now because I wonder how medical facilities in the area will cope with a spike in demand].

If you're reading this from PC II, PV or PC V, I hope you and your loved ones are keeping well. We're watching the US numbers very closely, as I'm sure you are too for the case of Singapore! Every night, many of us stay up for the latest data on SG's COVID-19 cases.