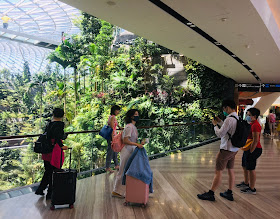 Chances are you've already seen people on the streets of Singapore wearing surgical masks to protect themselves from airborne germs. Fears that the novel coronavirus would lead to a SARS-like pandemic has changed our way of life virtually overnight and overshadowed the Lunar New Year long weekend.

Here are eight measures last seen during the 2003 Severe Acute Respiratory Syndrome (SARS) that are likely to make a comeback (some already have).

1. Contactless greetings
The 2003 fight against SARS popularised contactless greetings where people acknowledged one another without shaking hands. A nod and a smile, palms pressed together were all widely-accepted substitutes that prevented inadvertent cross contamination. We didn't have wide screen smart phones and clever memes back in 2003. Probably won't take long for some creative minds to think of something people could flash digitally to say Hi or Bye.

2. Threat velocity
SARS struck suddenly and caught many Singaporeans unprepared. I covered my first SARS story one quiet weekend when I was asked to interview passengers from a Singapore Airlines flight that was quarantined in Frankfurt, Germany, after reports that some passengers were stricken by a mysterious illness. I remember the gaggle of Singaporean reporters at Changi Airport Terminal 2 joking that we should interview the passengers from behind the arrival terminal glass panels by writing questions on pieces of paper or using an extra long boom mike (the kind used by TV studios that hang a microphone on a long pole). Seventeen years on, I don't recall ever having met those passengers as they were taken for checks by health authorities. From a slow start, SARS soon turned deadly in Singapore. Looking at the novel coronavirus, we must be prepared for a steep escalation in threat velocity.

4. Split office
Business continuity was the buzzword during SARS. Companies did so by splitting the workforce and having staff work from separate locations. I was one of the journalists who covered the SARS crisis in 2003. Our newsroom was separated into three teams: work from News Centre in Toa Payoh North, work from the SPH office in Genting Lane and work from home. You can imagine the news editor's utter dismay when she learned that journalists from different papers who worked from Toa Payoh North and Genting Lane inevitably met one another at press conferences. Worst, some continued to meet after work - which defeated the whole idea of preventing the spread of the SARS virus by isolating the work force.

5. Travelling with windows down
During SARS, some commuters who travelled in taxis did so with windows wound down for better ventilation. When I saw a taxi on the way to Changi Airport last Saturday with a window half down, it brought back memories of SARS 2003 when people wound down taxi windows to avoid breathing in recycled air-conditioned air inside enclosed car cabins. In today's context, you might see private hire vehicles moving around with windows slightly down too.

6. Dialects made a comeback
Ever since the Speak Mandarin Campaign took root, one hardly heard local dialects on national television in Singapore. SARS changed this. I recall local celebrities on TV translating health advice to dialects like Hainanese, Teochew and Hokkien to maximise the effectiveness of public health messages. We may soon need to do the same again. Oh, and we had a SARS Hotline too.

7. Sticky problem
Some places like  hospitals and government buildings gave coloured stickers to visitors to indicate that the walk-ins had been checked for signs of fever (which could indicate SARS). Pedestrains could tell they were near a place with SARS checks as traffic lights and lamp posts were plastered with dozens of discarded stickers, making them look measle-like especially when round red stickers were used. Some of the stickers that indicated the wearer was OK were nicely done. I might have kept a sheet or two of these SARS stickers. I hope my collection will not expand in 2020.

8. South Korea and Japan
Proving that SARS wasn't an Asian disease, South Korea and Japan were relatively untouched by SARS. My colleagues and I wondered why. Kimchi? Wasabi? Genetics? Who knows? Those who had been to these countries believed that good hygiene may be a reason why they beat SARS. [I had yet to visit S Korea and Japan in 2003. Only did so in 2015 and 2016 respectively. Yes, the Koreans and Japanese generally practice very good hygiene.]