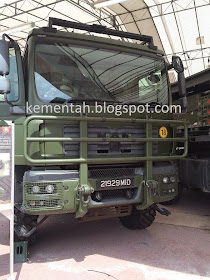 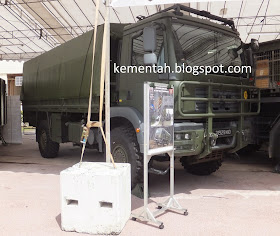 Singapore Army 3-tonner trucks that formed part of the National Service experience for our citizen soldiers will soon reach the end of the road.

Taking the place of the once ubiquitous army transports is a fleet of brand new 500 German-made MAN Light Transporters, the first of which made its public debut today at Headquarters Armour at Sungei Gedong Camp during the "A Day in the Army" event.

Project ETHAN
Purchased under Project Ethan, the MAN Light Transporters are poised to replace not one but two types of wheeled transports in the Singapore Army. These are the 3-tonners and the 7-tonners. Senang Diri believes Project Ethan is the largest truck contract signed by the Ministry of Defence (MINDEF) since 5-tonners were acquired, also from the MAN stable.

The new workhorses for the Singapore Army's Combat Service Support Command (CSSCOM) are military derivatives of the civilian MAN TGM 18.280 twin-axle, 4x4 cargo truck. In Singapore Armed Forces (SAF) service, the MAN Light Transporter is not exactly "light" as it has an unladen weight of 9,160 kgs and tips the scale at 16,000 kgs fully laden. The MAN Light Transporter measures 3,557mm tall, 8,476mm long and is 2,935mm wide.

A key difference from the MAN 5-tonners purchased earlier is the noticeably longer wheelbase. This allows the MAN Light Transporters - known as Ethans by army personnel - to carry a 20 foot container with ISO twist-locks on its cargo bed. This gives CSSCOM more flexibility in configuring Ethans for specialised roles by the simple expedient of bolting a mission-oriented 20 foot container and warload onto the truck.

When outfield, Ethans can be driven in water up to 750mm deep.

CSSCOM added that a powerful engine and a reliable brake system allow the vehicle to "easily take on the 60% slope" and provided a photo to prove the Ethan's ability at climbing steep gradients. 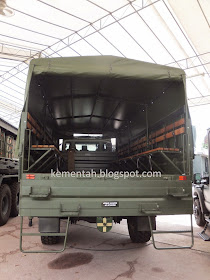