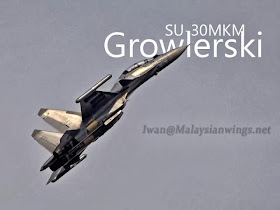 More than meets the eye: A Royal Malaysian Air Force Su-30MKM, Malaysia's most capable warplane, pulls up over Dataran Merdeka (Independence Square) in Kuala Lumpur on 21 September 2013, with wingtip pods not seen before on RMAF Su-30s. When paired with A2G (air-to-ground) munitions paraded at ground level, the pods are believed to give the RMAF's Su-30s the ability to engage enemy air defences from afar. Growlerski is a moniker given by the Malaysian Military Power blog. Image by Iwan from Malaysianwings.net. The image is used with the kind permission of the Malaysian Military Power blog. Click here to access the blog. 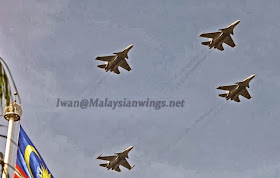 Odd one out: The Royal Malaysian Air Force (RMAF) included a special treat for eagle-eyed plane spotters at the Malaysian Armed Forces 80th Anniversary Parade. The last Su-30MKM in this flight of four carried wingtip pods thought to contain electronic warfare equipment. According to Malaysian defence enthusiasts, the pods were not carried during flypast rehearsals. This is not a photoshopped image as the pods are visible in images of the parade taken by this blog. Image by Iwan from Malaysianwings.net. The image is used with the kind permission of the Malaysian Military Power blog.


Most spectators would have missed it - the pair of slender pods on the wingtips of just one of a quartet of Royal Malaysian Air Force (RMAF) Sukhoi Su-30MKM warplanes in diamond formation that thundered over the Malaysian Armed Forces 80th Anniversary Parade on 21 September 2013.

There was nothing in the commentary that told spectators what to look out for or what this piece of defence equipment was designed to do. But joining the dots weeks after the parade, it is apparent that the RMAF used the parade to showcase hard and soft kill options for its most advanced fighter force.

For the Rakyat whose eyes turned skyward at the arrival of the RMAF's most advanced warplanes, the low level flypast by Su-30s and other RMAF war machines presented yet another photo opportunity. The flypast triggered a chorus of cheers and applause that rippled across the crowdline at Dataran Merdeka as the MAF put its firepower on show.

For defence enthusiasts who invested time and effort sifting through their haul of images from the parade, the picture of the flypast by 11 Skuadron's warplanes opened their eyes to the RMAF's warfighting capabilities. This included the RMAF's ability to suppress or destroy enemy air defences in Wild Weasel-type attacks, including dealing with AEW platforms, with Su-30MKM warplanes in the vanguard of RMAF strike packages.

The wingtip pods appear to be a form of electronic countermeasure of Russian origin designed to allow the host aircraft to befuddle enemy radars with spoof signals. That fact that the pods were designed during the Soviet era to defeat NATO's integrated and multi-layered air defences is noteworthy. One should also bear in mind that the Su-30 family, which evolved from the Su-27 Flanker, was the USSR's answer to the state-of-the-art in American fighter aircraft technology.

Integrated show of force
What was seen in the air must be matched with the firepower shown at ground level. The MAF staff officer who made the decision to kit up one Su-30MKM with the special pods and unveil seldom seen A2G munitions must have trusted that a professional audience would know what they are looking at and would understand its implications.

Malaysian bloggers tell Senang Diri that the two rehearsals did not include all the bells and whistles seen during the actual parade. The Royal Malaysian Navy had an Exocet anti-ship missile as part of the Mobile Column rehearsals, but the business end of 11 Skn's war machines appeared only on the actual day of the parade.

These include Russian air-to-air and air-to-ground munitions - including cruise missiles - acquired for 11 Skn. The missiles went on parade for the first time and follows their display some years ago at an RMAF Open House (which had a lower signature compared to the parade).

Levels of combat capability
In not so many words, the RMAF has made a declared capability in SEAD and DEAD missions as it has shown that it can suppress air defences using EW (soft kill) or take them out using precision-guided munitions (hard kill).

The declared capability by the RMAF indicates it is in possession of, cognizant of and exposed to, the level of military technology represented by the defence electronics and munitions it displayed.

Strategic ambiguity
The number of systems/munitions in its arsenal and the level of competence in fielding the said systems cannot be deduced simply from the capability declaration during the parade. This in itself is a form of deterrence as the strategic ambiguity that regional defence planners must grapple with works to the MAF's strategic advantage.

It is important to remember that a declared capability is not the same thing as an operational capability. The latter includes having a concept of operations (CONOPS) that governs how military power is to be employed. CONOPS must be more than paper plans. These need to be exercised regularly to acquaint everyone with their role in the whole scheme of things.

Defence professionals would appreciate that operational capabilities, particularly for new weapon platforms or weapon systems, need to be scaled up from baby steps. Progress made from IOC to FOC could, in some cases, take years as integration and force coordination issues are worked out and the capability matures along the way.


During WW2, Japanese ground forces understood the value of supporting infantry operations with armour. They did so while opposing American beach landings by using light armour to support the infantry as a form of Counterattack Force. However, their CONOPS was let down by the technical inferiority of Japanese tanks versus American armour which were more capable in firepower, mobility and protection. By 1945, the Americans had the added advantage of honing their combat edge in armour tactics, having fought the Germans in Europe, and used their combat experience to devastating effect against Japanese tanks.

Also in WW2, both the German Luftwaffe and United States Army Air Force (USAAF) recognised the value of twin-engine fighters for long-range operations. But German Bf-110 Zestroyers assigned for extended range air ops early in the war had a woeful combat record as they were technically not up to the mark when pitted against single-engine fighters like Hurricanes and Spitfires.

Undaunted, the USAAF employed twin-engine fighters for essentially the same roles in later years, with notable successes as engine output and aerodynamics on platforms such as the P-38 Lightning helped American pilots meet and defeat single-engine fighters. The CONOPS for both air arms were sound and articulated competently - just that the Luftwaffe was let down by a technically inferior air platform.

The term Ops-Tech Integration has often been used to bridge how warfighters see the battlefield with how the defence science community tailors war machines for the same arena. Common sense tells you that the existence and depth of Ops-Tech Integration cannot be discerned from a parade or open house. But this factor should be borne in mind when crafting capability estimates because an experienced and robust Ops-Tech Integration framework can spell war-winning potential by giving both sides a real world reality check.

The last takeaway concerns Information Operations. In particular, the value of crowd sourced intelligence in the blogosphere that has always been appreciated by this blog.

Regular readers would have seen the blog posts about the ATM Ke80 event, in the lead-up to the 21 September parade and thereafter. The reports went cold after about two weeks.

Interestingly, the unsolicited prompts to write about the Su-30's Wild Weasel-type SAM-suppression capabilities popped up after netizens noted that the blog had apparently missed the special mission Su-30. That prompt is much appreciated. Putting aside the originator's identity, timing and motivation behind the prompt, the RMAF Su-30 capability development is worth writing about on pure news value alone. Hence this post.