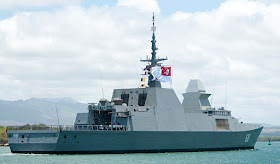 The Singapore navy stealth frigate, RSS Formidable (68), shows off two new structures atop her hangar during a port call in Hawaii on 27 June 2012.

Weatherproof coverings which conceal the structures from inquisitive eyes probably drap defensive aids, possibly an unknown type of anti-torpedo decoy. The twin launchers are thought to be able to discharge their munitions to protect the 114-metre long warship against attacks by wake-homing torpedoes. The size of each launcher suggests that it comprises a multi-tube configuration which is designed to ripple fire anti-torpedo munitions in a set pattern to catch incoming torpedoes.

The primary anti-submarine weapon for the Republic of Singapore Navy's (RSN) six Formidable-class warships is the S-70B Seahawk, one of which is embarked on each stealth frigate.

RSS Formidable is in Hawaii to join 41 warships, six submarines, more than 200 aircraft and 25,000 personnel from 41 other nations at RIMPAC, the Rim of the Pacific naval warfare exercises which stretch from 29 June till 3 August 2012. The play area is centered around the Hawaiian islands.

The stealth frigate's participation in RIMPAC takes on from RSS Supreme's assignment at RIMPAC 2010, where she participated in maritime exercises within the littoral zone.