Lest we forget: Singapore Armed Forces (SAF) should remember and honour its old warfighters and defence engineers

Not so, as a walk down memory lane will show.

The way the Third Generation (3G) SAF is sometimes described, you cannot help but wonder if younger Singaporeans or foreign defence observers end up looking down on people, concepts and military technology fielded by early batches of SAF regulars, full-time National Servicemen and reservists.

In terms of people, concepts and technology, the First Generation (1G) SAF packed a punch in air, naval and land warfare in certain weapon platforms and systems that even the 3G SAF cannot match or took decades to catch up with in terms of capability.

1G Singapore Army V-200s outgun M-113 APCs for quarter century
The Singapore Army's foray into armoured warfare in the late 1960s saw it develop the V-200 Singapura series armoured car with United States vehicle maker, Cadillac Gage. As we lacked our own defence industrial base and production capability, our design concepts had to be passed to Cadillac Gage who translated our specific operational requirements into an enlarged version of the V-100 Commando armoured car known as the V-200. 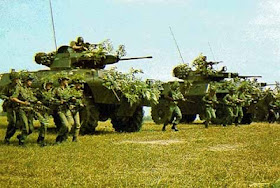 V-200s Forward! Singapore Army armoured infantry advance under the 20mm guns of V-200 armoured personnel carriers. The American-built 4x4, built to Singapore Army specifications, was the army's first APC. It was superceded by tracked M-113s in 1974 which had superior tactical mobility at the cost of a weaker gun armament (armoured turret with 20mm and optical sights replaced by hand held 12.7mm Browning in open cupola and iron sights).

On paper at least, the V-200 scored well in meeting our Army's requirements in terms of firepower, protection and mobility. It was amphibious, could carry an infantry section of nine soldiers, was well-armed for all-round defence with 7.62mm General Purpose Machine Guns and had a high road speed. A version of the V-200 was armed with a two-man turret with a 20mm Oerlikon cannon and 7.62mm co-axial MG.

In field trials, the upsized armoured car proved to be unwieldly and the General Staff made a decision to test the then-new American M-113 armoured personnel carrier (APC), which was bloodied in Vietnam.

When we moved from wheels to tracks, the Singapore Army benefitted from a tracked M-113 which had better cross-country mobility than the V-200.

However, we lost out in terms of firepower. Our Army gave up the V-200's power-operated, optically sighted 20mm Oerlikon for a pintle-mounted 12.7mm Browning heavy machinegun which was aimed by iron sights in an open cupola. Measured by weight of fire, protection for the gunner and accuracy of rounds sent down range, the V-200 with its 20mm cannon was a better bet.

It took Singapore more than 25 years before we closed that capability gap with the Bionix 25 Infantry Fighting Vehicle and M-113 Ultra Overhead Weapon System (OWS). Even then, the BX 25 and M-113 OWS cannot match the high angle of elevation of the V-200's 20mm gun, which was designed to protect soldiers from low flying aircraft and helicopters and to engage enemy forces in urban shootouts. The limited elevation of the BX 25 and OWS means the 25mm Bushmaster cannon cannot reach high floors in certain tactical situations.

Our pioneer defence engineers had developed a 20mm turret that proved a hot seller but sales moved after Cadillac Gage astutely downsized the V-200 after its firsthand experience with the SAF. In terms of vehicle evolution, the Commando armoured car is probably unique in naming convention as its development cycle moved from V-100 to V-200 and then to the smaller V-150 (and not sequentially, 100, 150, 200).

1G Republic of Singapore Navy missile craft live up to their name
On the naval front, our Navy's Sea Wolf-class Missile Gunboats (MGBs) went through a series of upgrades before they were retired early this century after some 30 years of distinguished service.

One upgrade, developed by Singaporean defence engineers, armed MGBs with a combo of Gabriel anti-ship missiles and Harpoon anti-ship missiles. The missile craft were fitted with four firing points for Gabriels and racks for up to eight Harpoons, though the full warload during operations was probably lower than the theoretical maximum of 12 missiles (four Gabriel and eight Harpoons).

This warload gave MGB commanders maximum tactical flexbility engaging Enemy surface combatants in congested waters. Military nuts familiar with the Gabriels would know this missile is a semi-active homing bird, which means it is guided on its flight out by the Signaal weapons sight on the open bridge. Gabriel missiles could be fired with friendly or neutral Alpha Mikes in the vicinity, which is a capability that earlier marques of the Harpoon could not achieve as the Harpoons were designed for open ocean warfare. 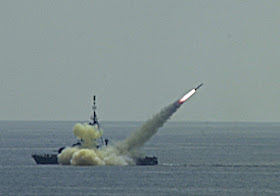 Missile Away! A Harpoon anti-ship missile speeds downrange, leaving its mothership RSS Sea Scorpion wreathed in a cloud of smoke. Within seconds, the solid rocket booster will breakaway, leaving the air-breathing missile to cruise towards the target barge with a near smokeless trail.

With the Enemy in sight, an MGB could proceed to initiate the engagement using Gabriel missiles knowing full well the missile strike was less likely to harm surface vessels. This is because guiding the missiles optically reduced the risk of wayward munitions.

Till today, our MGBs rank as the only missile craft armed with two types of anti-ship missiles - a capability unmatched even by the Republic of Singapore Navy's Formidable-class stealth frigates.

Our 1G MGBs truly lived up to their name as missile boats for strike warfare.

1G RSAF Bloodhound SAMs unmatched range and supersonic speed
While we may be justifiably proud of the Republic of Singapore Air Force (RSAF), the pioneer Singapore Air Defence Command (SADC) still holds a commanding lead in air defence capability that today's 3G RSAF has not matched. 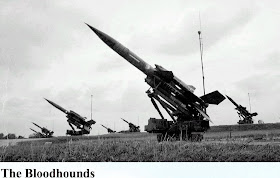 Scorpion's sting: Futuristic looking even in the 1970s and 1980s when they guarded Singapore skies, Bloodhound Mark2 SAMs, possibly deployed at Missile Site "Bravo", stand fully fuelled, armed and ready for launch. In terms of specifications, 170 SADA's Bloodhounds were the largest, fastest and longest ranged SAM ever operated by the RSAF.

The 1G air force's Bloodhound Mark 2 surface to air missiles (SAMs), which Singapore inherited from Britain's Royal Air Force, were and still are the SAM with the longest range and fastest speed ever deployed on this island. Clocked at more than twice the speed of sound during firing trials, Bloodhounds posed a credible threat to large bombers and massed aircraft formations.

With a published range of over 80km, the Bloodhounds outrange the 3G RSAF's I-HAWK missile fire units which can hit targets some 40km away. In their time, the Bloodhound's ramjet main engines and solid fuel rocket boosters were the state of the military art. Even with such technology in our hands for several decades, we may have failed to appreciate the design philosophy and reliability of these ramjets in powering guided missiles. Today's ultra long range missiles that we see emerging from Russia owe their long range and high speed to ramjet technology.

There are other factors that a capable, integrated air defence network should be measured against besides the range of its guided missiles. But the bragging rights of RSAF personnel from 170 SADA who manned Missile Sites Alpha, Bravo and Charlie during the heyday of the Bloodhound SAM stands unmatched even by the 3G RSAF.

There are many more examples from our military history that underscore the lethality of early generations of SAF war machines. Some army, navy and air force examples would be obvious to all. Some remain classified to this day even though they were potential battle-winners in their time.

On a broader scale, it indicates the danger of highlighting a new platform or weapon system's advantages over an older system in terms of certain attributes, while ignoring or glossing over a more holistic comparison.

James Fallows in his essay, Managers, wrote:"The failing of managerial defense is usually described as its inability to distinguish between efficiency, in the economic or technological sense, and effectiveness on the battlefield. That covers the point, but too crudely. The real problem is the use of an oversimplified, one-dimensional form of analysis, often based on simulations and hypothesis, in place of more complicated judgments, based on data from combat or realistic tests, that take into account the eight or ten qualities that must be combined to make a weapon effective. The worst kind of management seeks a single optimum, a one-scale index of efficiency, like the mindless scales of 1 to 10 for grading a woman's beauty or one or four stars for a movie's appeal."

With this in mind, go through some of our collaterals describing 3G military technology to see if they hold true to the argument above.

There are several takeways worth pondering over:
1. Never downplay or belittle the early generation of SAF warfighters or defence engineers in an attempt to puff up the 3G SAF.

2. Old soldiers have something to teach young ones too, in terms of concept of operations, tactical employment of 1G weapon systems and platforms and the specific operational requirements that defined what was delivered.

3. The 3G SAF is not doing enough to engage and preserve the institutional memory of its pioneers for reasons mentioned in point 2 above. These pioneers will eventually die and take their stories with them, so better work fast.

4. With 900,000 Singaporeans having gone through National Service, thousands of NSmen represent a valuable resource pool for 3G SAF servicemen and servicewomen to learn from.

5. It will be clear to mischievious minds that from an information management standpoint, one could write or argue a rather persuasive case that chips away at the 3G SAF by highlighting blind alleys and lost opportunities in weapons development. : )

The counter to point 5 lies with nurturing well informed and motivated 3G warfighters, thinking soldiers who know their past and know where the SAF they inherited is headed. Are we there yet? I am not sure, having seen how some of our young servicemen behave.

These younger ones - the Generation Ys and Strawberry generation - should also make it a point remembering the old adage, that he who does not learn from history is doomed to repeat it.