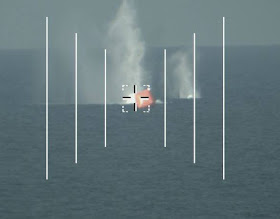 From self-made surface targets put together from empty oil drums, broom sticks and radar reflectors, the Republic of Singapore Navy (RSN) now uses several types of surface targets - including sophisticated ones for challenging target engagements - to test the guns and missiles aboard its warships.

Killer Tomato target buoy
The Killer Tomato target buoy (above) is used for surface gunnery shoots. The air-filled plastic buoy is made in a bright shade of crimson called International Orange and comes in various sizes. The ones typically used for surface target practices are about 7.3m by 3.7m by 5.5m (24 feet x 12 feet x 18 feet). Killer Tomatoes are inflated by one of the participating ships and dropped overboard. The buoys are said to be visible on radar to a range of 10 miles.

Killer Tomatoes are useful for gunnery practices as they do not explode or break up immediately when struck by shells. Punctured buoys can stay afloat long enough for gun crews to have a go at it with "live" rounds several times before it fully deflates and sinks. 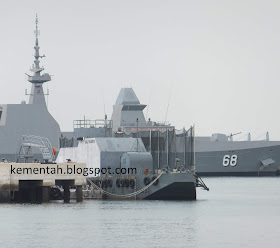 Jolly Roger target barge
A barge in the Jolly Roger series served as missile bait for Fleet RSN. Jolly Roger II is seen above with the stealth frigate, RSS Formidable, in the background. Jolly Roger II has a dark grey hull and white superstructure, with metal shapes that resemble guns and deck equipment painted in grey, white or black. The barge's narrow beam and arrangement of the shapes suggest a generic fast attack craft design. Even when stationary, the target barge is a small, hard-to-hit surface target for RSN sea skimming anti-ship missiles such as the Harpoon. Video cameras and realtime data links track the missile engagement by filming the scene on deck when the missile hits the target barge. 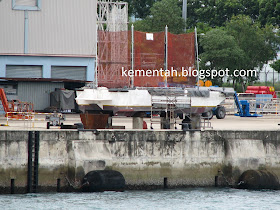 EP target
A more unusual target is based on the hull of a Fast Craft Equipment Personnel (FCEP) waterjet-propelled fast landing craft. The target is painted white for maximum visibility and has nets hung above its hull to register near misses.

The Singapore navy's EP-series of surface targets is believed to be remote controlled. This offers challenging target profiles especially if the EP is conned by a skilled operator who knows how to use the FCEP's speed and manoeuvrability to stress out the gun crew. An FCEP can pivot on the spot, attain speeds in excess of 20 knots and come to a sudden crash stop (not recommended with troops on board). The firing ship must know how to open its gun arcs and should preferably have a weapon with a high slew rate or the EP could slip out of the firing arc if the gunner is slow to respond.

The Navy's surface targets are developed, operated and maintained by the Naval Logistics Command (NALCOM).
Here's the view from the bridge of the stealth frigate, RSS Steadfast, as the A-gun fires three 76mm rounds at a Killer Tomato in the South China Sea.
David Boey at 12:01 AM
Share