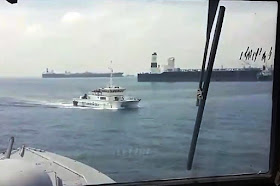 There was no sign of the rough patch in Malaysia-Singapore ties over air and sea space, looking at the tenor of our bilateral defence relations which enjoyed a good run this November.

Up until recently, the Angkatan Tentera Malaysia (ATM, Malaysian Armed Forces) and Singapore Armed Forces (SAF) continued to build on longstanding ties, thanks to a packed calendar of events that gave personnel from both countries many professional and informal opportunities to know one another better.

With this week’s sudden turn of events that put border security in the spotlight, ATM and SAF personnel who invested time and effort to forge warm and friendly relations may wonder if it was all for nought.

On Tuesday, Malaysia said it wanted to take back control of airspace over South Johor, which the UN’s International Civil Aviation Organisation had delegated to Singapore and which the Republic had been managing for decades.

And so, like a bolt from the blue, the goodwill established between two armed forces has been overshadowed as the neighbours shoot diplomatic notes, claims and counter-claims at one another.

The ATM and SAF staged two war games successfully last month. The 24th edition of Exercise Semangat Bersatu (which means Unity in Spirit), held from 18 to 28 November, involved 980 personnel from both armies who trained together in Johor.

From 26 November to 3 December, Exercise Malapura saw some 600 personnel from the Royal Malaysian Navy and Republic of Singapore Navy come together to practise the planning of naval operations and deployment of warships, helicopters and warplanes for maritime security scenarios in the Malacca Strait.

On a broader front, the Malaysian Army hosted the 28th ASEAN Armies Rifle Meet in Melaka for marksmen from the 10 ASEAN nations to pit their skills against one another in friendly competition. Army chiefs from all ASEAN members attended the event, which had the theme “Fostering Camaraderie” as its call to action and from the smiles and handshakes seen, everyone lived up to the spirit of the annual shooting meet.

More informally, army ties benefitted from Malaysia’s hosting of Eksesais Joint Adventure Training in Pahang from 26 to 29 November. The army exercise – which was actually a series of team-bonding games - saw about 50 personnel from both armies get to know one another through outdoor activities like hiking and beach games.

While  the games  at the political and diplomatic fronts augur well for relations, other realities can cloud the positive picture. It is thus timely to remember certain cardinal principles in international relations.

First, ponder the imponderable. Ties between countries can deteriorate suddenly without warning. As we witnessed from the good outing the ATM and SAF enjoyed recently, external forces can reset relations overnight. One need not live a distrustful, paranoid life because scenario planning that helps develop drawer plans for imponderable scenarios should allow everyone to sleep better at night.

Above all, continue to build on friendships at all levels despite the atmospherics – as the ATM and SAF recently demonstrated.

Second, be aware of grey-zone conflicts. This is a metaphorical state of being between war and peace, where one country may aim to win either political or territorial gains associated with overt aggression using military or paramilitary forces without crossing the threshold of open warfare with its rival.

Malaysia’s deployment of Jabatan Laut (Marine Department) and coast guard vessels is a classic example of how gray-zone rivalries pan out and mirrors the aggressive moves made by coast guard forces of certain countries who try to assert authority in the South China Sea.
Relations between some countries are easy to figure out. Russia-Ukraine, Saudi Arabia-Qatar and to a lesser extent Turkey-Greece are examples of pairings where diplomats shoulder the burden of historical baggage that stirs continued enmity.

As for our Little Red Dot, bilateral spats should provide a wellspring of teachable moments for successive generations of Singaporeans to learn the difference between rhetoric and realpolitik. The ongoing border issues over maritime borders off Tuas and air flight zones over Seletar only serve to expand Singapore’s bank of stories for national education classes.

Finally, think long term. Coming back to a defence-related example, the Semangat Bersatu army exercise would not be what it is today if army officers gave up building rapport at the first rebuff.

Malaysia’s hosting of the 1st Battalion, Singapore Infantry Regiment in Kluang, Johor, is an achievement that the exercise planners could only dream of when Singapore hosted the first of the war games in May 1989.

When it came to Malaysia’s turn in October 1989, Singapore had to fly its soldiers to Sarawak as the federation was not ready to see SAF troops train in Johor.

It took years before the trust and comfort level reached the point where SAF troops could step on Malaysian soil in the peninsula for a bilateral exercise. Indeed, many of the 1 SIR regulars and full-time national servicemen who took part in the recent war games were not even born when the groundwork was laid nearly three decades ago.

So never allow temporary irritants to distract one from gunning for long-term good. Army leaders from Malaysia and Singapore showed what can be accomplished over decades with continued efforts to build friendship and trust.

Stormy ties? Just wait, years if need be, and let the irritants eventually fade out.

Indeed, Singapore’s Coordinating Minister for Infrastructure and the Minister for Transport Khaw Boon Wan sounded a similar note this week when he urged people from both sides of the Causeway to look ahead.

Mr Khaw said: "When I discussed the High-Speed Rail (HSR) project with (Malaysia's Economic Affairs) Minister Azmin Ali, I had a distinct feeling that the young ministers in Malaysia want a fresh relationship with Singapore, without any past baggage."

"There is so much we can gain working together. I believe the citizens on both sides of the Causeway also expect the younger leadership of both sides to work together for a brighter win-win future.”
David Boey at 8:00 AM 27 comments:
Share
‹
›
Home
View web version