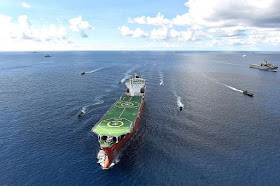 Lily pad: MV Avatar with her improved helicopter deck gives Republic of Singapore Air Force (RSAF) helicopters more options during operations. Avatar is seen here in lightly loaded configuration, with her bulbous bow half out of the water. 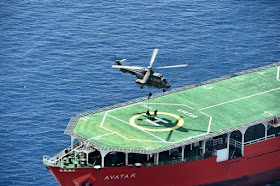 Before and after: The project to expand the size of Avatar's helideck makes the ship better suited for air operations, especially during heavy weather when the cranes previously installed would pose a hazard to air ops. The loss of a self-loading capability and access to the cargo holds suggest that Avatar has been configured principally for helo ops while retaining her Ro-Ro capability. 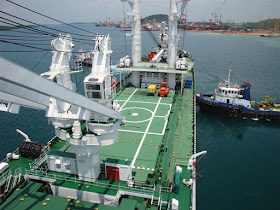 Two prominent deck landing spots replace her derrick cranes forward of the bridge. These are understood to be rated for medium-lift helicopters such as Super Pumas/Cougars. With the heli deck in place, the cargo holds cannot be accessed as readily as before.

Her new look recalls modifications made to Allied and Axis merchant vessels during the Second World War when cargo vessels and passenger liners emerged from shipyards as aircraft carriers.

In the 1980s, Britain's Royal Navy requisitioned merchant vessels such as the Atlantic Conveyor in the lead-up to Operation Corporate which led to the recapture of the Falkland/Malvinas islands from Argentine forces.

Avatar sports a more extensive rebuild than Atlantic Conveyor, as seen by the new flight deck. However, no hangar facilities are provided for embarked naval aviation nor is a deck lift visible to bring helos below deck.

The addition of two landing spots to Avatar means the RSN possesses a theoretical maximum effort capability of 10 helo landing spots - eight aboard the four 141-metre long Endurance-class tank landing ships and two aboard Avatar. This is sufficient to carry out a company-size helicopter insertion from these vessels.

It should be remembered that each Endurance-class LST can already land a battalion-size team using embarked landing craft of the FCEP and FCU series.

Here are some fun facts about MV Avatar: 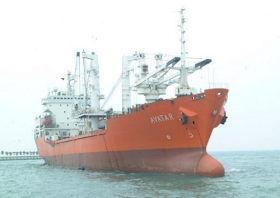 Waiting by the roadside in the dead of night for a Singapore Army convoy to pass, the Military Policeman (MP) was soon greeted by the sight of military vehicles he was tasked to guide along their route of advance.

Military traffic, which stretched more than two kilometres long, saw the MP fanning his light stick interminably from front scout to rear guard. It was an imposing sight of the number and variety of vehicles in a Singapore Army Division orbat.

The scene during Exercise Mouse Deer some years ago demonstrates the challenge for the Singapore Armed Forces (SAF) whenever full-troop exercises are done in Singapore.

Space is limited for military manoeuvres. More so for combined live-fire exercises (CALFEX).

From coastal hook war games like Golden Sands and Voyager to multi-Service exercises like Tussock, which saw one of the first large-scale deployments of SAF war machines in civilian areas in the 1990s, time and space constraints imposed on the war games template in Singapore have led the SAF to look to partners overseas.

Thanks to years of defence diplomacy, the SAF now trains in more locations worldwide than any other armed forces in ASEAN. Such training, which takes place round the world and literally round-the-clock, underscores Singapore's commitment to nurturing the SAF's deterrent edge that is multi-spectrum, mission-ready and technologically superior to what the SAF could meet in combat.

Among the first locations for brigade-size war games is Taiwan. In terms of climate and terrain, the exercise areas are said to resemble the SAF's projected area of operations where pockets of urban areas like small towns are linked by a road network in relatively open terrain.

Many of our Operationally-Ready National Servicemen would recall venturing to Taiwan for war games such as Ulysses and High Noon. Activities in Taiwan, conducted during the time when the Singapore Ministry of Defence (MINDEF) and SAF were working towards the SAF 2000 modernisation effort, were pivotal for SAF warfighters to test and refine evolving battle concepts and military technology.

While Taiwan's night life made it a popular destination among full-time National Servicemen (NSFs) and NSmen alike for rest and recreation (R&R), it became clear that the cost of conducting war games on the island came at an increasingly hefty price.

How does one explain this to the People's Republic of China, to whom knowledge of SAF activities in Taiwan under the Star Light banner are regarded as an open secret?

The second is cost. From Taiwanese vendors in their ninja vans to farmers who claim compensation for everything from farm livestock distressed by the light and sound show during a CALFEX, to Taiwanese officials eager to charge a higher price for access to training grounds, the war games in Taiwan do not come cheap.

Enter Australia and her Shoalwater Bay Training Area (SWBTA). Nobody is bloody-minded enough to train there during summer in the outback, except perhaps the SAF.

War games conducted under the banner of Exercise Wallaby have been staged in SWBTA for decades, typically towards the end of the year when it is summer Down Under. These war games bear witness to a successful and growing partnership with the Australian Defence Force (ADF).

The relationship between the ADF and SAF is more than a military-to-military bilateral.

Singaporeans will #neverforget the contribution of the Diggers in the defence of Malaya during the Second World War. The Malaya campaign led ultimately to the Fall of Singapore on 15 February 1942, ushering in some 3.5 years of brutal occupation under the Japanese.

Australians nonetheless played an active part in defending Singapore. One recalls the exploits of the destroyer HMAS Vampire, which witnessed the loss of the battleship HMS Prince of Wales and battlecruiser HMS Repulse off Kuantan, the tireless Australian and New Zealander pilots who went up time and again from Singapore airfields in their outclassed Buffalo fighters to battle Japanese aircraft, and Australian Diggers who put up a fight in Lim Chu Kang where Japanese forces first step foot on the Singapore mainland.

Australia-Singapore defence ties are, to us, a very special relationship.

In years to come, the ADF-SAF relationship will broaden in scope and deepen in technological and operational complexity as the armed forces from both countries benefit from enhanced training facilities built in Queensland.

In the short term, Australians can look forward to taking part in building projects as new infrastructure is constructed under a massive A$2.25 billion master plan.

Upsized ADF training facilities will more than double the number of SAF personnel who can train Down Under, from a cap of some 6,000 personnel that SWBTA can accommodate today to some 14,000 personnel. This translates to war games that can take a full Singapore Army division, including support arms like artillery and combat engineer battalions and combat service support battalions so vital for sustaining the pace and tempo of any military action.

The troops and war machines will have to get to Australia and back to Singapore somehow. So transport and logistics professionals at both ends stand to benefit.

As successive generations of Singaporeans are cycled through military exercises in Australia, the lasting impressions on these individuals as they grow up and possibly return at some point in future to explore other parts of Australia can only be imagined. Potential spinoffs that will benefit the Australian economy are not small - to put it mildly.

In years to come, the various Frames that underpin the Wallaby manoeuvres can be expected to be grow in complexity. Furthermore, the level of integration between SAF Services and with the ADF will grow in tandem.

To get the most from the expanded training facilities, MINDEF/SAF planners should make full use of the lead time to plan and develop war games for the future.

We have years of experience to leverage upon, having successfully executed component exercises such as Bold Conqueror, Bold Gladiator, Forging Knight and Orion embedded as part of Wallaby.

Add to this the ADF-SAF bilateral exercise, Trident, and one will realise that defence planners from Canberra and Singapore will have many exercise templates to improve upon.

And while the Australia-Singapore Comprehensive Strategic Partnership Agreement will provide a fillip to Queenslanders - from the building and construction sector, F&B outlets, retailers and the tourism sector that the SAF will doubtless engage for R&R - one should look above and beyond merely counting dollars and boots on the ground.

There may come a time when large-scale exercises staged in Australia can be integrated with war games held simultaneously on other parts of the planet.

These could all linked and displayed on a simulated battlespace which could, for example, test the mettle of Manoeuvres Forces during two-sided encounters  in SWBTA while integrating the command and control elements with rocket artillery batteries and war planes in the United States, who can use the live-fire practice there to test the effects of their munitions.

The agreement inked by Australia and Singapore has made SWBTA future-ready, ensuring that the training ground continues to serve a central role in sharpening the defence readiness of the SAF and the ADF and packing tremendous potential for taking people-to-people ties to a new level.