Politics blunts the potential of airpower during crisis

Skyfall: Destruction rains from the sky as Russian Backfire bombers unload iron bombs over Syria in a demonstration of global reach, global power.

It used to be that the mere threat of aerial attack would have the Enemy think twice before doing anything rash. Not anymore.

We have in Syria and Iraq a non-state actor who has endured and continues to defy the aerial might of Arab air arms, NATO air forces and airpower unleashed by the superpowers - mentioned in order of lethality.

And yet, it continues to stay in business and takes every opportunity to cock a snook at attempts to bomb it off the face of the planet.

Indeed, recent world events have shown that airpower has done nothing to detect, deter or defend against the expansion of the non-state actor's operations in Europe and Africa.

If Giulio Douhet were alive to witness this, would his theory of  airpower be influenced in any way, shape or form? Probably not.

This is because the apparent impotence of airpower stems from politics and not the potential of war machines to conduct politics by other means, from the Air by day and by night.

If allowed to persecute the Enemy the way North Vietnam was hammered by successive Linebacker raids, if the gloves came off and strategic bombing was constrained more by weather conditions, aircrew availability and stockpile of bombs than by concerns over collateral damage, if airpower planners could shape the battlespace the way German cities were reshaped during WW2, the story - truth be told - would be vastly different.

One must recognise that airpower must be allowed to unleash its full-force potential when the decision is made to go from troubled peace (during a Period of Tension, for example) to war.

Target sets meticulously mapped out and updated by generations of airpower planners must be addressed systematically and ruthlessly with the aim of achieving conflict termination on one's terms. When the time to talk is over and the time to act dawns, one must act decisively and allow aerial firepower full flight.

Alas, such is easier said than done. 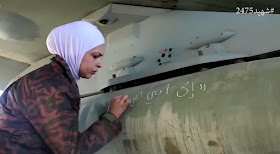 Pen & Sword: Royal Jordanian Air Force ground staff pen messages on bombs as a prelude to air strikes in Syria after a captured Jordanian F-16 pilot was burned alive. The publicity accorded to such missions has since evaporated.

We have seen how an angry Jordan promised aerial retribution early this year after one of its pilots was burned alive. After the burst of news stories that resulted from all that sound and fury, Jordanian military responses appear to have shied away from the media limelight.

We are today witnessing a resurgent Russia remind the world that Mother Russia's heavy bomber forces and cruise missile inventory is well-stocked and ready for business.

But cut out the agitprop and we have a situation where the once frightening war-winning potential of airpower appears to have been blunted.

The current situation is germane to the people who work at Gombak Drive because it dilutes perceptions on the effectiveness and efficacy of airpower as an instrument of war.

Deterrence can be compromised should the failure of shock and awe in the Middle East lead to miscalculations that Singapore's ability to lead and shape the air campaign will be similarly diminished. With deterrence at the core of Singapore's Total Defence effort, we had better take notice of how the info ops game is being played by all sides engaged in the Middle East theatre.

During a POT, such strategic miscalculations could embolden hostility rather than force a step down in tension even when foreign defence professionals discern that the Singapore war machine is clearly mobilising for operations. Why? Because the misguided, the naive and the self-deluding may think they too can weather the coming storm.

What then can one do?

By continuing the conversation among professional military circles, one can propagate awareness of Singapore's ability and determination to defend itself and leave no doubt that Autostrike is real, tested and good to go, empowered and en masse. Drip feed combat power under a weak, vacillating island defence plan? Not for us.

Whether such awareness translates to Respect depends very much on our success in convincing foreign defence watchers that the light-and-sound show executed by our fighting forces during war games such as Forging Sabre, Wallaby and Bold-this-and-that provide telling signs of what's to come should push come to shove.

This task of awareness-building has become even more challenging amid growing misperceptions that more than a year of aerial effort has failed to negate the threat from the non-state actor in the Middle East. If airpower was unshackled from political constraints, the situation today would look starkly different.

The conduct of RSAF air operations in war is a complex one. Info ops that support the Air Force in peacetime is Complex 2.
David Boey at 2:00 PM 1 comment:
Share
‹
›
Home
View web version