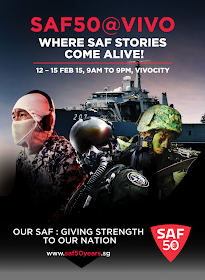 The Singapore Armed Forces (SAF) has no plans to stage an Open House during this milestone year which marks the SAF's 50th anniversary.

Compared to celebrations in 1990 which marked the SAF's 25th anniversary, this year's celebrations may seem muted.

But an Open House is just one way for our armed Services to engage you. And the means to do so have grown substantially since SAF 25.

Here are six things to know about SAF50@Vivo:

1. When the SAF turned 25, the SAF At 25 Exhibition was held over 10 days from 15 to 24 June 1990. This centrepiece of this event was an Open House at Paya Lebar Airport which featured a massive showcase of SAF war machines from the Army, Navy and Air Force. Some of you may remember that mega Open House.

2. The SAF50@Vivo show will stretch over just four days, from 12 to 15 February 2015 at the Vivocity shopping mall. This is akin to the Navy@Vivo show on steroids.

3. Compared to 1990, the SAF's operational tempo has increased substantially. This year's operational taskings include evergreens such as the National Day Parade at the Padang (there was also a big parade and Mobile Column during NDP 1990) as well as new taskings absent in 1990. These include the SEA Games, Shangri-La Dialogue, Singapore Grand Prix F1 race and the IMDEX Asia naval show just to name a few of the banner events. The SAF also has a number of overseas deployments scheduled for 2015 that will also demand bandwidth.

4. Compared to 1990, our threat environment has likewise changed beyond recognition. Today, non-state actors have made the threat from terrorism far more organised, globalised and lethal than what the SAF faced in 1990. This means that more than ever, our SAF Operationally-Ready National Servicemen, full-time National Servicemen and Regulars have to be at the top of their game 24/365.

5. In 2015, the Ministry of Defence (MINDEF) and SAF can leverage on more channels to reach out and engage you. There was no Facebook in 1990, no websites or homepages to visit. Youtube was not invented till this century. The SAF, Singapore Army, Republic of Singapore Navy and Republic of Singapore Air Force have all ventured into the social media scene. This means engagement can continue year-round, instead of being anchored to a fixed geographical venue in the case of an Open House.

6. But even as we realise the benefits of social media as a communications tool, one hopes that Open Houses will continue to be on the calendar of SAF events after the surge of SG50 activities taper off. Open Houses have proven to be crowd magnets and people flock there for good reason. So MINDEF/SAF should bring back Open Houses when opportunities arise. 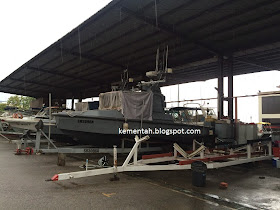 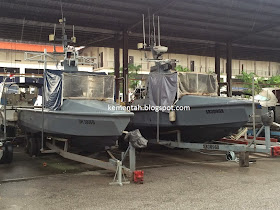 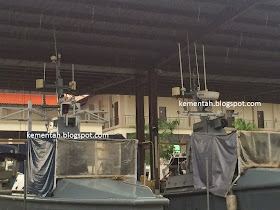 These harbour craft may look like ordinary, 9-metre long powerboats. But take a close look at the weather-proof covers draped over the "cabins" of each vessel and the antennae sprouting from the mast and you'll realise these vessels are somewhat special.

The Venus unmanned surface vessels, SR3008B and SR3096A, were photographed at a local marina stored alongside civilian powerboats and sailboats.

Unveiled in 2010 by Singapore Technologies Electronics (ST Elec), the Venus USV has been described in company literature as being adaptable for a range of missions. These include anti-submarine warfare, mine sweeping and harbour security duties armed with a remotely operated weapons mount.

When stored in the marina, both USVs were unarmed. However, the deck configuration for each USV was different as SR3008B was fitted with a frame aft of the sensor mast.

Indonesia-Singapore defence relations: A special, longstanding friendship that has lasted more than 40 years 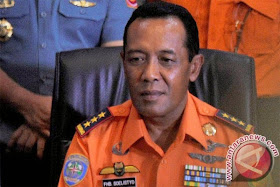 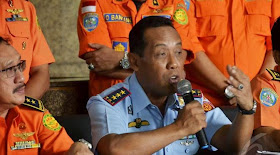 Among the many badges that adorn the uniform of the chief of Indonesia's search and rescue (SAR) agency is the Pilot Wing from the Republic of Singapore Air Force (RSAF).

Those who wonder how it got there should look at the distinguished career trajectory for Marsekal Madya Henry Bambang Soelistyo, head of BASARNAS (Badan SAR Nasional, the Indonesian SAR agency).

Go back in time to 2010 when Soelistyo then had one-star on his TNI air force general's uniform. As co-chair of the Joint Air Force Training Working Group (JAFTWG) between the Indonesian air force and the RSAF, which alternated their meetings between Indonesia and Singapore, Soelistyo gained firsthand experience planning, discussing, refining and implementing a host of programmes between the TNI-AU and RSAF.

Special friendship
These paved the way for the continued advancement of TNI-AU-RSAF air warfare manoeuvres codenamed Elang Indopura, maritime surveillance exercises in the CAMAR Indopura series and the SAR exercise codenamed MANYAR Indopura. Our air exercises have grown in size, scale and complexity, thanks to the efforts of planners from both sides keen on constantly expanding the envelope and building on past successes.

It is safe to guess that a good number of pilots from both countries now involved in the multi-national search for AirAsia Flight QZ8501 honed their flying skills from these exercises.

But it was not all work.

The task of directing and coordinating large fighter aircraft formations from both nations, flying at high speed, at low level and on many occasions with live ordnance, demands a high level of trust and confidence from all ranks involved in such war games. Along the way, friendships are forged as our people spend face time with one another, talk things through and weigh various options for tackling complex war game scenarios. 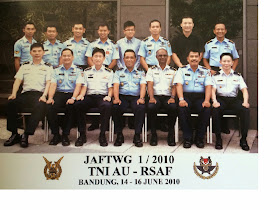 Rising star: The future chief of BASARNAS, then a one-star TNI air force general (seated, centre) with TNI and RSAF colleagues who formed the Joint Air Force Training Group in 2010.

Such interactions contribute valuable yet intangible credits to Indonesia-Singapore defence ties. Indeed, the personal ties have done much to foster a special friendship between the TNI and Singapore Armed Forces (SAF).

And so, when TNI-SAF come together for joint operations, many personnel draw upon that special friendship which serves as a catalyst for the ability of our two armed forces to group together quickly and execute missions safely.

In December 1997, it was the TNI-led search effort and TNI-AL divers who recovered the flight data recorder and voice recorder of Singapore's SilkAir Flight MI185 from the Musi river in Palembang.

The period from 2004 to 2006 recorded three SAF HADR operations in Indonesia. These were:

March 2005: Nias earthquake assistance. The RSAF deployed three Chinook heavy-lift helicopters. These airlifted 70 stretcher cases to Medan and ferried some 870 rescue workers to affected areas over two weeks. The SAF medical team treated about 800 patients in one week in the Gunung Sitoli area.

In January 2007, we once again worked alongside the TNI in the search for Adam Air Flight 574 which crashed in Sulawesi. One RSAF Fokker 50 aircraft conducted 20 air search sorties between 3 and 17 January 2007. The RSN deployed four sets of underwater locator beacon detectors and six personnel as BASARNAS scoured the sea for the aircraft's flight data recorder, which might unlock clues as to how the plane crashed.

There is another joint TNI-SAF mission involving an RSAF drone, which was deployed to scan dense, ancient jungle on a hostage rescue mission in the 1990s. This was executed at a faraway place called Timika. It was hush-hush during its time. But if you happen to see UAV Command's colours, look at the streamer carried by the Colours party (see below) and ask yourself how it got there. Yes, Team 525, you did well and those who know are proud of your achievement. 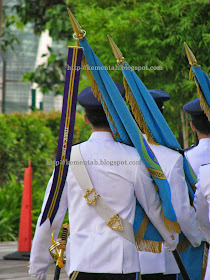 The TNI and SAF have achieved much together over the past four decades, ever since our first joint naval exercise codenamed Eagle.

Such friendships do not happen by chance.

Credit for this special friendship - a bond between ASEAN's largest and smallest member - goes to armed forces personnel from both sides have worked hard to build and sustain such ties.

And despite occasional hiccups in our bilateral relations, it is heartwarming to see senior officers continue to cherish our longstanding camaraderie at a personal level - whether spoken out loud or demonstrated by the simple, low key gesture of having a badge on one's honours row.
David Boey at 11:47 AM No comments:
Share

In 2014, Singapore's Ministry of Defence (MINDEF) reported two deaths in the Singapore Armed Forces (SAF), up from a single fatality reported for 2013.

As we usher in 2015, the rise in this tally is a timely reminder for all in the defence eco-system to take workplace and training safely seriously. At the same time, we must learn to be aware of and in control of our personal issues well. Should we feel down and need a listening ear - and we all go through such patches at some point in our lives - we must know whom we can approach to get things back on track.

Since 2009, when 10 SAF deaths were logged, the MINDEF/SAF have put in immense efforts at improving training safety.

This saw a dramatic reduction in fatalities in 2010. The SAF closed the year with zero fatalities.

However, that clean sheet has proven elusive.

In 2011,  the SAF reported three fatalities.

The following year saw one fatality. However, one should remember that 2013 clocked at least five instances of near misses. These include servicemen who were hospitalised due to cardiac arrest, some 300 suspected Norovirus cases at BMTC on Pulau Tekong and an incident involving a Republic of Singapore Air Force pilot who was involved in a hard landing in a United States Navy T-45C Goshawk trainer in Florida.

However, this must be seen in perspective. Both took place in the first half of 2013, which suggests no slide in training safety awareness and protocols as the year wore on.

The SAF had a busy operations tempo in 2014. Last year, the SAF staged overseas deployments to the Gulf of Aden and contributed search teams to look for the missing Malaysia Airlines Flight MH370  as well as the ongoing search for AirAsia Flight QZ8501 in the Java Sea.

Looking ahead, the SAF has a busy calendar in 2015 as Singapore gears up for its Jubilee Year celebrations under SG50.

The ops tempo for Regulars, full-time National Servicemen and Operationally-Ready NSmen is likely to remain high in 2015. This will involve local deployments and a training calendar packed with training arrangements and exercises around the globe.

As a new year unfolds, the commitment to safety and better management of personal issues should be a top priority for all ranks.
David Boey at 7:30 PM No comments:
Share
‹
›
Home
View web version