Singapore's intention to raise a core group of 100 engineers and scientists who specialise in nuclear technology by 2024 means our security forces have about 10 years to up their game.

It is an urgent task as the security forces and protocols needed to safeguard nuclear-related research facilities,  radioactive material and research personnel will demand niche skills that surpass our nuclear incident contingency plans now grouped under Ops Iodine.

As of today, we are not ready to host 100 experts in labs dedicated to nuclear research. By 2024, we better be.

The Singapore Armed Forces (SAF) and Home Team agencies must be prepared to raise the bar and do so quickly as the 10-year window is a relatively short time frame to introduce capabilities that our security forces lack.

Here's the back story: On 23 April'14, Singapore energised its goal of grooming 100 nuclear experts under the 10-year Nuclear Safety Research and Education Programme, which will have a war chest of $63 million set aside for the first five years. Spearheaded by the National Research Foundation (NRF), the programme forms part of long-term plans to keep Singapore abreast of nuclear technology developments in the region.

NRF Chief Executive Officer, Professor Low Teck Seng told the Today newspaper:“Many of our neighbours are looking at nuclear technology and it is important, as the Prime Minister says, for us to be aware, be knowledgeable and, as such, be able to assess the technology and its impact on Singapore — be it in terms of the potential it has for us, in terms of the risk we face, as well as the ability to harness its potential in every aspect.”

A capability infusion is likewise needed to ensure safeguards for nuclear technology will march in step with NRF's focus on nuclear tech.

Falling short would expose a major security loophole in an area of research that stands high on the wish list of the world's terrorist groups. If we fail to deter such elements, it will not be long before the world's terror elite sense an opportunity and try to test the system. 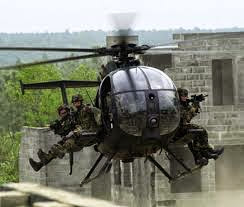 Security protocols must be drafted to oversee the movement of nuclear material that our research labs may require. These protocols would, in turn, require specialised firepower in the form of equipment, vehicles, maritime vessels and aerial assets (above) to protect nuclear material in transit, as well as rapid reaction forces that can intervene in an instant should unauthorised elements challenge the security protocols.

As nuclear material would be involved, the rapid reaction forces must pack more than just the firepower under the estab of the SAF's Special Operations Task Force (SOTF). The job of securing our future nuclear know-how will demand skill sets and know-how that go beyond the capabilities of our present-day CBRE units.

Beyond SOTF firepower, CBRE sensors and incident mitigation protocols, our intelligence assets must up their game by ensuring all individuals and organisations involved in our expanded nuclear research drive are screened thoroughly. In order to do so, we must have the smarts to know which areas of nuclear research are in demand as such research may be adapted for anti-social purposes, putting researchers with such knowledge at higher risk.

At the same time, Singapore's friends will need assurance about the type and depth of work done in nuclear technology that will put Singapore on the watch list of the world's nuclear watch dogs. In short, a corporate communications apparatus of sorts will be needed to ensure compliance with nuclear energy safeguards and signal to friends and frenemies that our intentions are above board and proper.

It is clear there's lots to do with so little time.

That 10-year lead time must therefore be used prudently.

Firepower must match brainpower as the SAF realigns itself for future security challenges in nuclear energy research.
David Boey at 12:40 PM 5 comments:
Share

When First Warrant Officer A retired from the Singapore Armed Forces (SAF) after decades serving the military, he decided to stay with the organisation he had grown to love by signing a fresh contract as a civilian Unit Safety Officer.

For all his years of experience and dedication serving the SAF, he saw his pay slashed by some 30 per cent after his pay was realigned with his new job scope.

Warrant Officer A should count himself lucky.

From what we are told, this Warrant Officer's experience isn't unique. Some SAF officers who moved from a combat vocation to a civilian desk job in the SAF saw their pay plummet by 50 per cent.

If you want to be clinical about things, the new remuneration packages result from the realignment of pay to the new job size. Reduced job scope, lighter responsibilities, fixed working hours, no night training and weekends off should count as suitable tradeoffs for the burden our men and women in uniform shoulder while in SAF service.

What's more, our former Regulars who switched to civilian appointments signed their new contracts with their eyes open under a willing buyer, willing seller relationship. So they ought to have done their sums to figure out if the civilian job is worth the trouble.

Many of these old hands know SOPs inside out. Many of them know how the processes and protocols evolved and can reinforce SOPs with stories they gained from their years of service that can drive home and strengthen key points in topics such as training safety.

Using a Human Resources (HR) Compensation and Benefits framework to resize the quantum of one's pay risks downplaying the immense value of real world experience that MINDEF/SAF would benefit richly from, if the former Regular was persuaded to stay with the SAF under a civilian contract.

In many instances, such experience is incalculable under HR matrices that factor in job size, peer comparisons and so on. If experience is worth paying for, this isn't obvious when one looks at some of the renegotiated salaries for our former Regulars who are now holding civilian appointments.

In the case of Warrant Officer A, his USO job scope may well compare favourably with a safety officer job in another industry sector (i.e. alignment of remuneration through peer comparison). But how does one price in operational experience (which he gained during an SAF operational overseas) and firsthand experience watching safety systems and processes evolve over the years?

Knowing how to set the sweet spot when pricing in real world, operational experience of our Regulars is relevant and timely as MINDEF/SAF looks set to expand the training cadre by some 1,000 Regulars in the coming work year.

Their terms of service, whether they are hired as uniformed or civilian personnel, career path and the synergy forged between training schools from BMTC to OCS will be closely watched by Regulars and job-seekers as they weigh the benefits of a career in uniform.

If uniformed Regulars are appointed for our training schools, MINDEF/SAF must guard against the evolution of a pecking order where some training appointments (OCS or teeth arms such as the School or Armour, School of Artillery) are viewed as being more prestigious compared to a trainer role in some support unit.

Beyond the arithmetic of how HR works out rewards and benefits for our servicemen and servicewomen emerges many heart-warming stories of SAF Regulars who stay with the profession of arms out of a (misguided?) sense of duty - not because they cannot find anything else to do when chucked on civvie street.

Among the scores of former combat Regulars whose pay was slashed by half are many loyal, dedicated and engaged individuals who put SAF before self.

But does the organisation care enough?

Tipping point
When job scopes and remuneration packages are renegotiated, there comes a point beyond which the erosion in pay can be belittling, demeaning and potentially damaging to morale. That 50 per cent pay drop is such a tipping point.

Seen in the context of a breadwinner who provided for his family for decades, the sharp drop in income will result in a lifestyle shift in his 40s - a period when the children are probably in their teens and when maximum support is needed for their higher education.

Self esteem is real and needs to be nurtured carefully.

The 50 per cent pay drop is potentially toxic to MINDEF/SAF engagement efforts because the cost savings in the person's new civilian contract are pitifully small when measured against the erosion in morale among Regulars who do their own horizon scanning and realise they may be better off making a job switch sooner rather than later. This could explain why not a few young servicemen and servicewomen decide to call it quits in their mid to late 20s after their first contract, or in their early 30s in the case of non-scholars who realise their career runway will be limited knowing their CEP is pegged at a certain level.

If left unchecked, the end result could see HR practitioners in MINDEF spending more time and tax money backfilling certain appointments due to the constant churn in personnel. It is false economy that shortchanges tax payers in the long run.

We have in the SAF today a wealth of experience amassed by Regulars who serve in declared units and even more valuable knowhow and experience from those in classified battalions and squadrons (1xx SQN, 1xx SQN, 2xx SQN).

This experience is worth paying for because retaining this data-information-knowledge-wisdom within the MINDEF/SAF workforce will strengthen the core institutional memory of the organisation. It will pay dividends many times more than the pittance saved from cutting salaries.

Our war fighters are not mere digits that fit into a matrix of job size and remuneration.

Let's hold our ground on the DR front till they get their act together.

SINGAPORE: Some 48 hours after his interview with Channel NewsAsia aired on Tuesday, the head of the Indonesian Armed Forces (TNI) has clarified an apology he made during the interview.

General Moeldoko said on Thursday that he had not apologised to the Singapore government for the naming of a warship after two Indonesian marines who bombed MacDonald House in Singapore in 1965.

Instead, he clarified that he was expressing his regret that the naming decision was final and would not be changed.

On Tuesday night, Channel NewsAsia aired an exclusive interview with General Moeldoko, during which he touched on the relations between Singapore and Indonesia, among other issues.

He was asked by Channel NewsAsia senior Southeast Asia correspondent Sujadi Siswo about the decision to name a warship Usman Harun after the two Indonesian marines, and the ties between the two countries.

"Once again I apologise. We have no ill intent whatsoever to stir emotions. Not at all. Second, relations between the two countries are on the mend. There've been communications among leaders. Singapore's Chief of Defence and I have spoken," General Moeldoko had said.

Following the airing of the interview, General Moeldoko posted a link to the Channel NewsAsia story on his own Facebook page. There was, however, a mixed reaction. He was questioned by some Indonesians as to why he had apologised.

These posts have since been removed from General Moeldoko's Facebook page.

Earlier Thursday, General Moeldoko spoke to Indonesian media at the President's Office in Jakarta before a Cabinet session to clarify his views. He said that the apology had been for the fact that the decision to name the ship was final and would not be changed.

The head of TNI's public affairs had also written to Channel NewsAsia, citing the right of reply to clarify the comments by the TNI chief so that there would be "no misinterpretation and misperception."

Echoing General Moeldoko's comments to the Indonesian media, the public affairs head said that "the TNI Commander was expressing his regrets that the naming was final and would not change."

The letter was copied to the chiefs of staff of the Indonesian Army, Navy, Air Force, and the head of TNI Intelligence. - CNA/ac
David Boey at 10:40 PM 2 comments:
Share
‹
›
Home
View web version